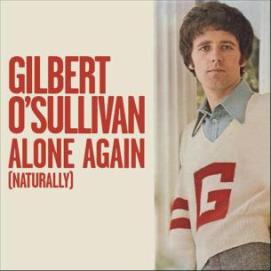 Before Gilbert O’Sullivan was who he has become, he was Raymond Edward O’Sullivan, a regular kid in Ireland with a father who worked in a meat factory. He painted, was a boxer and in college he started to write his own songs. In 1968 when he signed with CBS, that’s when Gilbert’s first two singles were released. None of the singles had his input, and no surprise, none of them were successful in any way.

His music has come a long way, and although Gilbert’s songs have been around for a while, and wouldn’t be known as novel anymore, it would be false to say his music does not remain in modern culture. “Alone Again Naturally” has been played in The Simpsons and the recent movie Love, Rosie. Artists in the industry have taken a liking to this song as well, and covered it multiple times. The most popular cover is perhaps Esther Phillips’. When Phillips’ covers your song, you know it has reached that level of song writing. There is no question why this song has remained timely. It is quirky, funny and has a lovely tune with a vintage quality. This song marks a point in O’Sullivan’s career where he found his sound.

“Alone Again Naturally” is more than just a sick mixture of sorrow with heartbreak and sarcasm, but an endearing piece with more emotions than one would think. The lyrics are clever and quirky, but quirkiness is one of O’Sullivan’s characteristics. With the lyrics and the muic, O’Sullivan has moulded our emotions of heartbreak into a creation that can be labeled as a bitter joke. He starts us off with, “If I’m not feeling any less sour, I promise myself to treat myself and visit a nearby tower, and climbing to the top, will throw myself off.” These dramatic lyrics that are a bit gawky at first capture the listener’s attention with its frankness. The rest of the lyrics follow along with love leaving no matter how it used to be. When O’Sullivan sings it there is no sorrow in his voice, no pain staking sounds, but only a regular tone he might use in a less subdued song like “Clair”. More emotion conveyed would have had a pure quality to it, but the lyrics were untrammeled to say the least.  O’Sullivan has proven to us onceagain of his songwriter skills. In “Nothing Rhymed”, he writes “This feeling inside me could never deny me, the right to be wrong if I choose and this pleasure I get from say winning a bet, is to lose”. There is a witty contrast that is unique and memorable.

In the live recording of “Alone Again Naturally”, there was a piano with violins and the guitar as accompaniment. No question, they fit the style of the song. The guitar during the riff sounded silly and fun, which we would hope to assume was intended, but as an instrumental accompaniment, it probably wasn’t the best choice. Out of all the music, the riff was brilliant. It was simple yet catchy enough for the listener to have it stuck in their head. There was a fair balance as well between O’Sullivan’s voice and the instrumental accompaniments. The accompaniment was not bland, as music tends to ignore dynamics, an essential element used to convey not only power but delicacy as well. The violins around the 1:38 point were cued to crescendo and brought out a melodic sound that gave the song more character.  O’Sullivan’s singing was a bit too detached and came in short bursts of staccatos. O’Sullivan’s voice is naturally serene and calming, so if it were smoother to fit with the melody, it would have enhanced the song.

The emotions conveyed in this are very different from his works “Clair” and “Nothing Rhymed”, but showed his variety. His sound has a trademark style to it: the piano, the catchy riffs and distinct staccato singing. O’Sullivan will always hold a very Sunday afternoon atmosphere of tranquility. No question will listeners remain to love this song, but it did have more potential. “Alone Again Naturally” demonstrates a rare artist who is not afraid to be silly and quirky and take a different perspective on love.